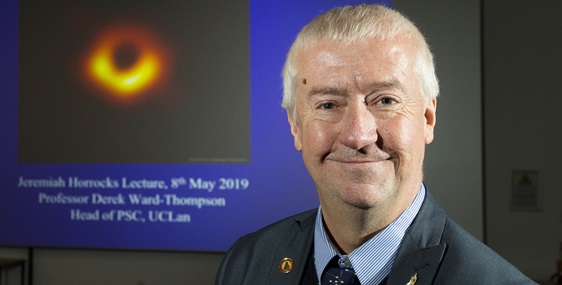 UCLan’s Professor Derek Ward-Thompson is one of the 347 world-leading scientists who formed the Event Horizon Telescope (EHT) collaboration and who will share the 2020 Breakthrough Prize in Fundamental Physics.

For the eighth year, and known as the ‘Oscars of Science,’ the Breakthrough Prize recognises achievements in the Life Sciences, Fundamental Physics and Mathematics, disciplines that ask the biggest questions and seek the deepest explanations. Considered the world’s most generous science prize, each Breakthrough Prize is worth three million dollars.

Using eight sensitive radio telescopes strategically positioned around the world in Antarctica, Chile, Mexico, Hawaii, Arizona and Spain, the global collaboration of scientists at 60 institutions operating in 20 countries and regions captured an image of a black hole for the first time. By synchronising each telescope using a network of atomic clocks, the team created a virtual telescope as large as the Earth, with a resolving power never before achieved from the surface of our planet. One of their first targets was the supermassive black hole at the centre of the Messier 87 galaxy – its mass equivalent to 6.5 billion suns.

One of the eight telescopes used to capture the image was the James Clerk Maxwell Telescope in Hawaii, which is part-owned by UCLan, and Professor Ward-Thompson worked with the imaging team to produce the stunning picture.

Collaboration Director Shep Doeleman of the Harvard-Smithsonian Center for Astrophysics will accept the prize on behalf the collaboration and said: “The award is a powerful testament to the impact our results are having, not only within astronomy, but across many fields of science and with the general public. This is an outstanding recognition of the EHT as a world-wide collaboration.”

The EHT collaboration will be honoured on 3 November at the 2020 Breakthrough Prize ceremony at NASA’s Ames Research Center in Silicon Valley.

Further information of the 2020 Breakthrough Prize winners can be found here: https://breakthroughprize.org/News/54